Ordered by the Centre Pompidou, Saule et les Hooppies is a travelling musical tour which proposes creating an awareness of art and culture for children from 5 to 10 years of age.

Combining design, stories, music and dancing, Saule et les Hooppiesis both a work and a singing comedy. It enables an assessment to be made of everyone's role in saving the planet. It encourages the participants, children and their parents, to use their energy and their drive to bring the system to life.

Similarly to the “Le Blobterre de matali” project in 2013, the designer decided to bring us into a world activating us by developing its own logic: its vegetation, its inhabitants, its energy, etc. and which is understood by singing it. The songs were written and orchestrated by the singer and sound artist, Dominique Dalcan.

Saule et les Hooppies was devised to travel throughout France and abroad. This musical tour will stop in towns to so that children can experience, together with their parents or in schools, a participative and immersive artistic experience. The aim is that this project will provide attachment points between the Centre Pompidou teams and the regions where they will be welcomed. The presence of Saule et les Hooppies will be an opportunity, together with local bodies (cultural, social or sporting) to conduct a variety of actions to mediate and create awareness of art (workshops for young people, festive events, exhibitions of works, etc.). Finally, this project is evidence of Centre Pompidou's long-term collaboration in conducting experimental and innovative projects with the artists. On the initiative of Corinne Rozental, this is the first time the designer has collaborated with the Young Public department after Modul’home and the Blobterre de matali, very successful with the public and still travelling around.

Saule et les Hooppies is a unique work enabling children, together with their parents, to experience an original artistic event by all together taking part in a musical tour.

The designer, matali crasset, devised this event to enable each one of us to take an essential role in the show by turning the merry-to-rounds comprising Saule et les Hooppies, working its elements and all creating a musical tour.

Saule et les Hooppies, an expression platform representing a remarkable tree, recommending a return to working together. Saule et les Hooppiesis worked by a pedal-board system which calls on the participants' energy. The main plateau comes to life in the way a musical comedy is sung by all.

It is a tree and its cosmogony, an imaginary ecosystem, a story of energy in every sense of the word, it is a merry-go-round approach, which is not within the logic of passivity. With this willow-tree, the spectators-actors combine their energies to create a fairyland, the imaginary. It is therefore a musical comedy whose actors are the public.

More than a world to be discovered, Saule et les Hooppies proposes a world in which everyone participates and finds their role there.

Saule et les Hooppies pushes a night into the cracks in the city, on the square

The Saule (willow), a lifesaving tree, saved the little boy Hoop from drowning and, thanks to a little powder-puff, passes to him its powers of perception and benevolence faced with the world that he turned on its head and which are reminiscent of the tree's branches. Saule also brought to life again species of animals and plants that can be seen all around it and which resemble the continuity of its roots. They seem to be the tree's continuity, a way of materialising the species' underground messages to each other. The squirrel, the wolf and the earthworm are to be found there. An old root has also taken refuge there. Entering into the willow means entering into a special microclimate, rather humid and hot. Whence the presence of the rain and sun and, consequently, the rainbow. As the story unfolds, Hoop will rally to his call the children who will become Hooppies and will take part in the story of the merry-go-round by providing the power by their singing and their gestures. A beneficial reach for the Willow and to the world. 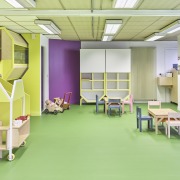 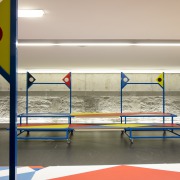 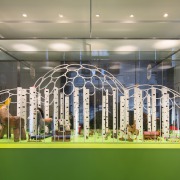 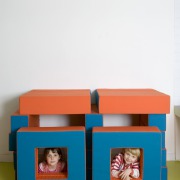