The project at the Pont Aven Museum in the Hotel Julia consists of a series of light domes that create subspaces where one can take a position.

Unity of place is generated by the ceiling lights and their projections on the floor like a carpet.  With reference to the Pont Aven School at the end of the 19th century and its "synthetism" lesson that stages the essentials by their colour, here, the structure of the dome ceiling light is evacuated to become the light source itself.

This form consists of light segments suspended from a white disc that acts as a reflector.  The segments are organised in three rows:  The first two illuminate the inside of the dome and the third illuminates the outside, which amplifies the presence of the object.

The light dome refers to the boldness and passion of Julia Guillou who, during the Belle Epoque, had extensions built onto her hotel integrating the large windows so characteristic of artists’ studios.  Dame Julia thus made her hotel the focus of the Pont Aven painters,

Positioned only 2.20 m from the ground to amplify its protective aspect, the ceiling light provides a very diffuse light that highlights the ceiling and the renovation details of the building as a whole.  The space created by the dome and light is complemented by a carpet on the floor with the idea of continuing the colouring proposed by the architects throughout the building, but now in the form of concentrates – three chromatic spaces of pure colours so representative of the emotions reflected by the Pont Aven painters. 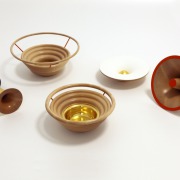 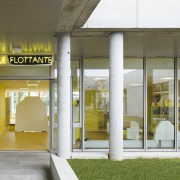 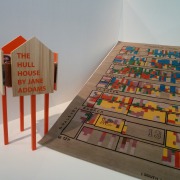 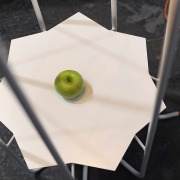