Tourism plays a major role for the economic development of the Languedoc Roussillon Region. The Region has an important cultural, architectural and gastronomic heritage and boasts a spectacularly beautiful landscape. These assets allow it to provide tourists with a wide range of important products and services. To maintain its competitive advantage over the long term, it is critical for the Region to ensure that all those operating in the tourism trade have a professional standard and that the services are of the highest quality. The training of young people is an important factor in developing professionals for the tourist trade.  The Region has therefore invested considerably in teaching and vocational education for young people.

With Lycée Georges Frêche, the Languedoc-Roussillon Region will benefit from a vocational centre of excellence for the hotel trade. For the first time, a vocational school in the Region will be equipped with a hotel that is run by students. This provides a real opportunity for students to interact with clients and face the realities of the profession. Some 650 students will benefit from the school from September 2012.

This commission to matali crasset, through the 1% artistic procedure, is one of the largest ever for a school and is in line with the Region’s dynamic policy to present a contemporary art work in each newly built school.

matali crasset’s design, entitled “Emulsion”, involves the creation of an original series of furniture and lightings. Her contribution is made in the areas of the building that are open to the public (restaurant and teaching hotel) and which are therefore accessible to all.

“Emulsion” is a polymorphic design.  Its original form is that of a kitchen utensil, a whip. As with oil and egg yoke which, once whipped together, are transformed into mayonnaise, the designer’s intention is to highlight the idea of apprenticeship, of the student who, through teaching, develops into a professional. This growth is shown here through the vegetable shape to underline the development of the apprentice into a professional.

The project’s most striking object is in the reception of the Hotel. Here, in the centre, there is a glowing tree, light and airy, measuring over 5 metres in height.

The tree’s structure is composed of whip shapes that are reproduced repeatedly in ever larger forms.  Colour as well as light variations and grading and the shadows that are produced form an intrinsic part of the object.

As well as giving the reception a strong identity, this intriguing object is above all a sign, a landmark and a point of departure for other pieces which distinguish and characterize the different areas of the Hotel. Using the same concept of repetitively reproducing the utenstil and playing with enlargements and diminutions, matali crasset develops a series of other objects – floor lamps, screens, ceiling lights, signage – which are scattered in different areas of the hotel and on different floors, providing a bright and colourful atmosphere. The different objects are placed in areas such as the rooms, the bar, the restaurant and the brasserie. “Emulsion” is the result of the transformation of a liquid into solid matter and a metaphor for training and apprenticeship.

matali crasset has developed and produced “Emulsion” with the pièces montées agency, which specializes in accompanying artists and monitoring the production of and installation of art works in public spaces.

To promote contemporary creation and ensure it is widely seen, the Languedoc Roussillon Region applies the “1% artistique” procedure to each new school that is built. In this way, 1% (exclusive of tax) of the construction cost of a building is devoted to commissioning an artist to create a work of art or to the purchase of one or more contemporary works that are then exhibited in the building or in the surrounding area. 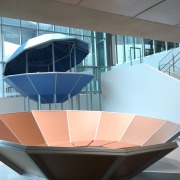 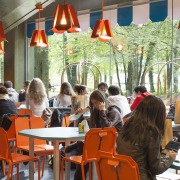 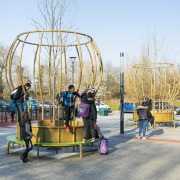 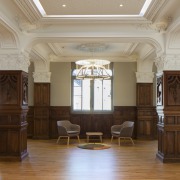