The order for a commercial bookshop, placed by the curator's team at Le Consortium Museum, was to create both an area which exhibits the Presses du Réel publishing work and, in remembrance of the literary programme Apostrophes,a platform for exchanges and discussions.

The project is based on an analogy and pays homage to the François Truffaut's film Fahrenheit 451based on the science fiction novel by Ray Bradbury: a dystopia where books are forbidden and where the fire fighters burn books.

I have been visiting Le Consortium for almost 30 years and it seems to me that the analogy had a strong meaning than in the present context, where culture is in crisis, is suffering and that public and independent places for challenging and taking a stand were all the more necessary.

The bookshop uses one of the elements in the film, the monorail. This ellipse stops anything being attached to the wall and to hang books in crate in a circular space.

The Safege monorail in François Truffaut's film is a legacy from a glorious industrial past and of a certain design which was enthusiastic about the technology. This raises the issue of questions and problems around communities and utopias, question at the base of questions forming the basis for design in society's choice.

The colours and the wall of the area bring to mind the defunct television colour cards.

Each crate, reachable on both sides, is dedicated to a section or collection of the Presses du Réel: artists' writings, monographs, historic texts on utopia such as those by Charles Fourier, and so on.

At the centre, an office makes it possible for books to be presented and also where chairs can be put to create a meeting area for about 20 people.

This is both an open and closed area, in order to concentrate and to meet people. 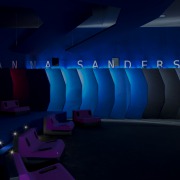 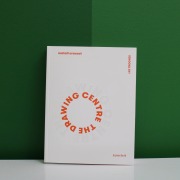 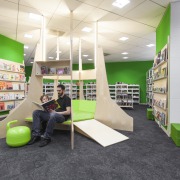 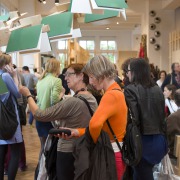