The biggest specificity of the project for the ENS Paris social lies in the rearrangement of the current site, while ensuring that the new designed facilities will still be usable when the games library moves to its future site five years from now.

The project consists in the creation of five different modules and three additional spaces.

All the modules “straddle” two rooms: there is the idea of opening, as well as inhabiting the new “gained” spaces, which is even more important to me.

They are set high up so that to be able to feel in distinct, yet informal spaces.

Many activities are, indeed, going on in the same place. Lifting some allows to better personalise them.

The “playhouse” above the entrance corridor.

Two in number, these modules allow children to gather around a game. It offers two seats facing one another with a table in the middle, leaving the ensemble accessible via a mini ladder.

Both modules are installed within the depth of two large storage units, which separate the kitchen from the corridor.

They are accessible from the corridor. A windowpane closes both spaces on the kitchen side, while still visually opening them.

Between them, two lockers naturally intercalate, including a shoe storage at their bottom and a clothes rail in their upper parts.

The “treehouse” straddling the kitchen and the corridor.

This is the module, where symbolic plays take place.

Below the long and narrow lift-up space, we can see the kitchen inside the general space, and, outside, a small terrace for one or two children to play as if in a little hideout.

Next to the kitchen, stairs give access to the reserved, children-sized treehouse. It consists of a space designed with small benches and tables at the back, and, upon arriving, an empty area left to play directly on the floor.

Next to the stairs and the entrance, there is an interior terrace to sit down.

This the module, which allows to play in a more informal way. It can be used by everybody, although it was specifically designed for teenagers.

The capsule is accessible via stairs, which also serve as tiers and a first space where to sit down. 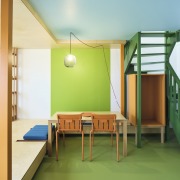 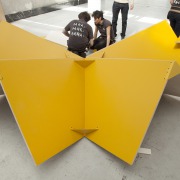 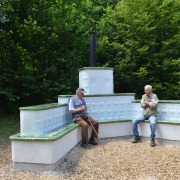 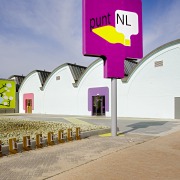