Matters of mobility have always interested me. In response to the so-oft repeated injunction to produce objects that "have meaning", I prefer to re-invent the function itself.  Instead of trying to symbolise a function with a form at any price, and to follow the codes of each sector (such as a radio, evoking sound, will never be designed like a toaster, which evokes heat), I tried to find the strength of uses in the imaginary.

The designer‘s work then consists in taming the ingredients making up an object so they will follow intent, which is the very reason for its existence.  This complexity of the creative process makes the work enthralling.  It demands great intellectual rigour.

This quite naturally encourages me to develop ideas of modularity, fluidity, changes, non-permanent devices that make it possible to qualify space by having the activities live together rather than stacking or superimposing them, which I have called life scenarios.

This process of proposing life scenarios is broken down in the objects into use scenarios.

When Designerbox proposed that I think about an accessible mobile electronic sound chamber, the idea and the archetype of the basket came naturally.

Taking Osmoze is taking one’s music on board, but doing so with a very special gesture – that of taking a basket to do something while being free to move.

An invitation to go out on a beautiful day and share this moment too.

So, Osmoze therefore proposes a scenario that makes these two urges possible and organises them in a simple obvious objet since it starts with an existing gesture.

Nothing is better than music to bring people together.

Nothing is better than a little light at the centre to warm hearts… and one could stay a little later in the evening.

So, Osmoze is more than an object. It’s an invitation and also a space – a space that takes on friendliness.

Osmoze between sound and light, thanks to a life scenario.

It represents that at home, and its green colour symbolically ties it in with vegetal life.

A handle and container associated with outdoor pleasures, going for a walk, sharing with friends, and a picnic,

This mobile loudspeaker is based on the analogy with the basket, a container, and diffuser in transparent polypropylene with a handle to grasp it easily.

The translucent structure can diffuse soft programmable light that can be modified by a remote control.

Thomson also found once again and returned to the Tim Thom adventure and my first steps in the electronic universe with Phllippe Starck:  This project brought back to mind our desire always to domesticate technology. 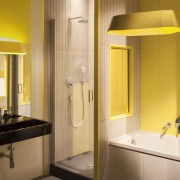